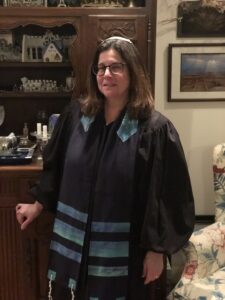 Rabbi Klafter became the Senior Rabbi of Temple Beth David in 2013. She brings her passion for Judaism and her knowledge and experiences to the entire congregation. As a spiritual leader, she is committed to fostering a kehillah kedosha, a sacred community here, where all are welcome. Prior to being named Senior Rabbi, Rabbi Klafter served for seven years as the Director of the Religious School. She has been instrumental in revising and reinvigorating the education curriculum and programming for students in Kindergarten through High School and their families. Rabbi Klafter has helped to develop and lead activities for the youngest children in our Temple family.

Rabbi Klafter was ordained at Hebrew Union College – Jewish Institute of Religion in New York in 1988, where she received a Masters in Religious Education as well as a Masters in Hebrew Letters. She studied at New York University’s School of Education and Brown University where she earned her B.A. in Religious Studies. She was awarded the title of Reform Jewish Educator by the National Association of Temple Educators in 1992. On May 2, 2013, Rabbi Klafter received her Doctor of Divinity, honoris causa, from Hebrew Union College honoring her 25 years in the Rabbinate.

Rabbi Klafter is a member of several professional organizations: the Central Conference of American Rabbis, where she has served on its Rabbinic Rapid Response Team, Committee on Women in the Rabbinate, and Committee on the Rabbi’s Family; the National Association of Temple Educators, where she crafted professional documents for the organization; the Women’s Rabbinic Network where she served on the Executive Board as the New York Regional Coordinator and as its Treasurer.

Rabbi Klafter describes her calling to the rabbinate:
“I realize that I heard the kol d’mama, “the still, clear voice,” from deep within me, emerging with clarity and purpose. I felt a passion for Judaism, for Jewish learning and for Jewish people. That divine calling has empowered me and uplifted me as a rabbi and a human being ever since. The “still, clear voice” in my own soul continues to inspire me as it did years ago. I believe it remains the voice that others will hear when they listen to me. It is a voice of strength and integrity. Through my rabbinate, I strive to touch people’s lives by my words, my actions and my presence. Just as I have found my voice within Judaism, I seek to continue to guide others as their rabbi to find their own voices and thereby transform their lives and our world.” 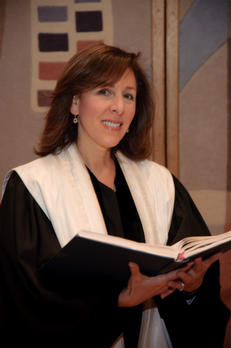 Rabbi Audrey Halpern’s love of Judaism, psychology, and music led her to the Hebrew Union College-Jewish Institute of Religion, where she was a scholarship recipient. She was awarded the Morris Smith Award of Excellence, the A.W. Binder Award of Achievement, and the American Conference of Cantors Award for Artistic Talent. She became an ordained Cantor and received her Master’s Degree in 1987. Rabbi Audrey Halpern was called to the pulpit as Cantor of Temple Beth David in 1988.

She earned her Rabbinic Ordination in 2012 and her Doctoral degree in counseling from the Hebrew Union College-Jewish Institute of Religion in 2015.

As a spiritual leader, Rabbi Halpern’s efforts are devoted to the members of Temple Beth David. Officiating at weddings, funerals, unveilings, minyan services, baby namings and conversions, the life-cycle events of each congregant are at the core of her calling as a rabbi.  In leading Passover seders, working with our children as head of our Bar/Bat Mitzvah program, and creating meditation and adult education classes, Rabbi Halpern has sought to find points of contact with every individual.

Having gone through her own personal health challenges in 2007, Rabbi Halpern transformed her pulpit and channeled her energy to help those in need of healing of body, mind, and spirit. She created a healing liturgy and is dedicated to serving members of the congregation facing their own crises. She spends much of her time and energy counseling the bereaved and visiting the sick. The Economic Crisis Relief Fund that she initiated has enabled the congregation to open their arms to those who struggle financially. She is proud of the generosity of our members who have reached out and helped through this worthy fund.

Rabbi Halpern’s professional experience is vast. Prior to coming to Temple Beth David, she served as Cantor and Educator of the Nassau Community Temple in West Hempstead. Rabbi Halpern received her undergraduate degree in Vocal Performance from the Manhattan School of Music. She remains an active alumnus as a selected mentor for incoming students. She has been a guest lecturer at seminars for graduate students at the Hebrew Union College, has served on the Executive Board of the American Conference of Cantors and has been a member of the Commission on Synagogue Music. She was selected as a committee member for the 50th Anniversary of the School of Sacred Music and has chaired numerous events for the American Conference of Cantors.  Rabbi has had an extensive concert and recording history, including performances with international orchestras here and abroad, premiers with Columbia University at Merkin Concert Hall, and as a guest soloist with the R’annana Symphony.

Rabbi Halpern met her husband Steven at this congregation. They were married here, and they have raised their family in the temple they call home.